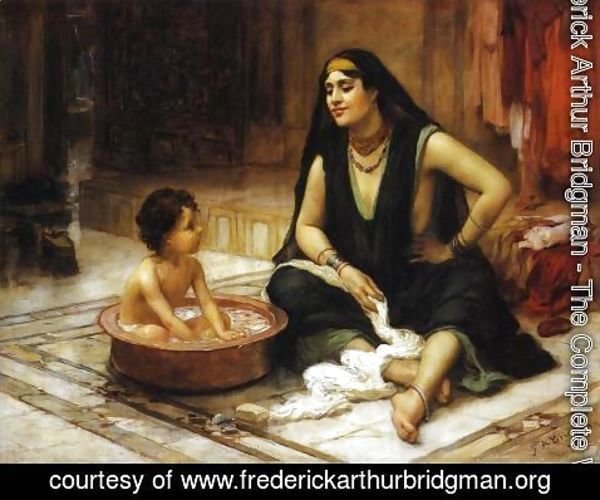 An American Southerner, born in Tuskeegee, Alabama, the son of a physician, Bridgman would become one of the United States' most well-known and well-regarded painters and become known as one of the world's most talented "Orientalist" painters.

He began as a draughtsman in New York City, for the American Bank Note Company in 1864-1865, and studied art in the same years at the Brooklyn Art Association and at the National Academy of Design; but he went to Paris in 1866 and became a pupil of Jean-Leon Gerome. Paris then became his headquarters. A trip to Egypt in 1873-1874 resulted in pictures of the East that attracted immediate attention, and his large and important composition, The Funeral Procession of a Mummy on the Nile, in the Paris Salon (1877), bought by James Gordon Bennett, brought him the Cross of the Legion of Honor. Other paintings by him were An American Circus in Normandy, Procession of the Bull Apis (now in the Corcoran Gallery of Art, Washington, D.C.), and a Rumanian Lady (in the Temple collection, Philadelphia, Pennsylvania). 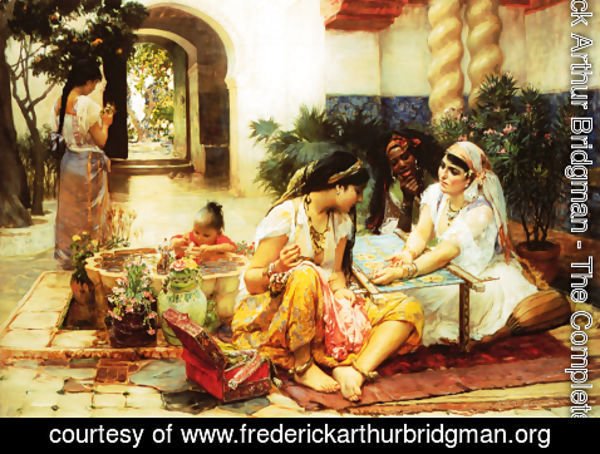 In 1867, Bridgman entered the studio of the noted academic painter Jean-Leon Gerome (1824-1904), where he was deeply influenced by Gerome's precise draftsmanship, smooth finishes, and concern for Middle-Eastern themes. (Bridgman would even become known as "the American Gerome.") No mere imitator, however, Bridgman would later adopt a more naturalistic aesthetic, emphasizing bright colors and painterly brushwork.

Bridgman made his first trip to North Africa between 1872 and 1874, dividing his time between Algeria and Egypt. There he executed approximately three hundred sketches, which became the source material for several later oil paintings. Additional visits to the region throughout the 1870s and 1880s allowed him to amass a collection of costumes, architectural pieces, and objets d'art, which often appear in his paintings. (Amusingly, John Singer Sargent noted that Bridgman's overstuffed studio, along with the Eiffel Tower, were Paris's must-see attractions.) Though Bridgman maintained a lifelong connection to France, his popularity in America never waned. Indeed, in 1890, the artist had a one-man show of over 400 pictures in New York's 5th Avenue galleries. When the show moved to Chicago's Art Institute, it contained only 300 works - testimony to the high number of sales Bridgman had made. 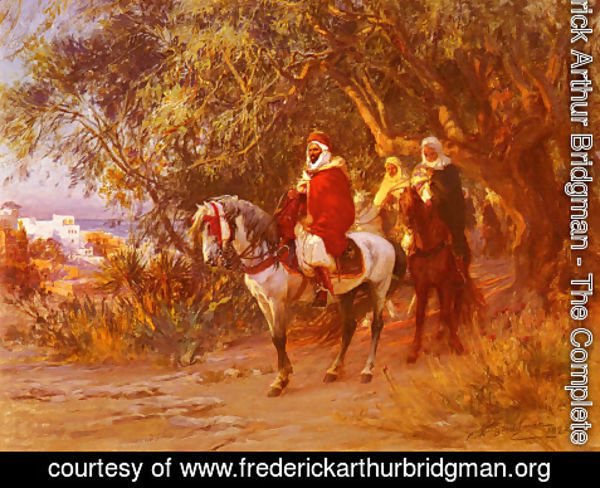 One of Bridgman's most recognized Orientalist images, "A Street Scene in Algeria", is exceptional for its biographical and historical significance. Many of its details can be considered "signature" motifs of the artist, and its subject, a pointed record of travel. In keeping with Bridgman's tendency in the 1880s to focus on intimate domestic subjects, two seated male figures are given pride of place in the center of the composition, gesticulating while they chat.